One of around 50 pine martens introduced into Mid Wales to help bring this important species back from the brink is now a regular visitor to the CAT woodlands. Dulcie Fairweather reports.

The pine marten is an integral part of British fauna and plays an important role in the natural dynamics of woodland ecosystems, so we’ve been delighted to help provide a safe haven for these intriguing and charismatic creatures that were once on the edge of extinction in England and Wales.

Following some scattered sightings at CAT, we have worked hard to improve their chances through careful woodland management and installing den boxes. Over the past few months we’ve been thrilled to find signs of increasing use of the CAT woodlands and have even enjoyed some brief glimpses on our camera traps.

Favouring the quiet of the night, the pine marten is a creature that few people actually spot.

One of six members of the weasel family (Mustelidae) native to the UK, the pine marten is distinguished by its beautiful creamy yellow to apricot throat patch or ‘bib’, the shape of which is unique to each individual. They have a rich chestnut brown fur and prominent, rounded ears which are highly sensitive.

Similar in size to a domestic cat, the pine marten is extraordinarily agile and a very confident climber – often landing on their feet. Amazingly, pine martens can leap up to four metres between tree branches. They boast numerous adaptations for arboreal life, including powerful forelimbs, a long tail to aid balance, and sharp, semi-retractable claws – the only member of the mustelid family to have this feature.

The pine marten prefers woodland habitats, living in tree holes, old squirrel dreys or old birds’ nests. Mature trees with holes and cavities are important for the species, as it uses these sheltered spaces to rest and raise young. Male pine martens can require up to 200 hectares of woodland for their territory.

Although classed as carnivores, they have an incredibly diverse diet and are opportunistic predators. They will feed on small mammals, birds, eggs, frogs, insects and fruit, adapting their diet to what is most readily available. In fact, grey squirrels make up part of their diet, so martens could prove a beneficial natural control of this invasive species. Recent studies in Scotland and Ireland have concluded that when pine martens move into an area, greys move out, allowing once-abundant red squirrels to reclaim old habitat.

As a result of their varied diet, their droppings – known as scat – can contain fur, feathers or the delicate bone fragments of small rodents. Sometimes, in the summer months, you may happen across scats that are blue or red in colour – a good indication that pine martens have been feasting on bilberry or rowan berry.

Pine marten scats can look very much like a fox’s, but there are a few ways to differentiate them. The easiest tip is to simply follow your nose. Foxes produce dog-like droppings and can be strongly pungent – although my dog can’t seem to resist rolling in them! On the other hand, pine marten scats tend to have a musty sweet scent that is not as unpleasant and is often compared, rather bizarrely, to parma violets.

Furthermore, pine martens have an intriguing way of hip wiggling while scatting, which produces a distinctive coiled shape. Despite being a nocturnal and elusive creature, pine martens are rather exhibitionist about their scat and will leave their droppings in prominent places such as the middle of paths, rocks, tree stumps and even on top of den boxes. If you’re in the woods looking for clues of a marten’s presence, keep an eye out for footprints. Whilst dogs and foxes have four toes, mustelids like badger, stoat, otter, mink and pine marten all have five toes.

Plight of the pine marten

Known in Welsh as bele’r coed (marten of the wood), they were once one of our most common carnivores, roaming the wild and ancient woods that carpeted Britain.

Heavily persecuted by Victorian gamekeepers, pine martens were shot for sport and killed for their fur, and the habitat that they depended on for their arboreal life drastically reduced. As a consequence, the pine marten became one of Britain’s rarest predators and was considered functionally extinct in England by the early 1900s.

Despite the overwhelming odds, the species clung on in remote corners of Britain. Thankfully, pressures were less intense in Scotland and the martens fared better there, with the North West Highlands offering sanctuary to scattered individuals. Over the second half of the 20th century, the Scottish marten populations flourished thanks to strengthened legal protection and conservation efforts. As a result, the species has achieved a significant recovery with a healthy population of over 4,000 animals.

However, south of the border the species remained all but absent, with the exception of small pockets in northern England and Wales. Showing little sign of natural recovery, it was painfully clear to conservationists that intervention was imperative to safeguard the future of this native animal.

The road to recovery

That’s where the Vincent Wildlife Trust (VWT) stepped in, successfully restoring a viable population of pine martens to the forests of Mid Wales.

Over a period of two years, a total of 51 pine martens were translocated from the Highlands of Scotland in a tremendous effort to prevent the species from going extinct in Wales. Prior to these endeavours, the last recording of a Welsh pine marten was as roadkill near Newtown in 2012.

In a remarkable contrast, the ‘first’ Welsh born and bred pine marten after relocation was born in 2017. They are now breeding successfully, increasing in numbers and expanding their range.

The iconic species has become a symbol of resilience and recovery, and its return to the Welsh landscape has been greatly celebrated.

Last year, some much welcomed good news was the arrival of kits from the first pine martens to be reintroduced to England – marking a milestone in the mission to boost their recovery across the border.

Here at CAT, we are dedicated to creating a place where nature can thrive – especially endangered species such as the pine marten.

In 2019, excitement mounted as numerous sightings of pine martens were reported on our land. An officer from the Vincent Wildlife Trust came to investigate and explore possible areas of pine marten interest in our woodlands. Wildlife cams were set up and artificial den boxes (which were already set up and well established) were checked for activity. Any research that could disturb pine martens, such as trapping animals or monitoring den boxes, must be carried out under licence.

Pine martens were regularly filmed further up the valley in nearby woodland by our neighbour Julie Brominicks, with the offspring of one of the original translocated animals making adorable viewing.

Equipped with the knowledge that we had martens in the area, we encouraged the animals to explore the new camera trap locations by offering a bounty of tasty delicacies – including strawberry jam, peanut butter and raw chicken eggs (a favourite of theirs). Camera traps are our eyes and ears in the woodland and help us to build up a picture of local biodiversity.

We finally captured film of a curious pine marten at the beginning of 2021 – and what a wonderful feeling it was to playback footage on the camera and realise what had come to say hello! Since then, we have been treated to frequent visits from pine martens, even when there is no bait available. It is extremely heartening to know that our carefully managed woodland is supporting these fascinating animals.

Continuous cover forestry is an approach that delivers a continuous timber supply without the need to clear fell (the removal of all trees from an area chosen for logging). We sustainably manage our woodland in this way, so it offers the most suitable environment for martens. We also retain areas that are protected and managed as non-intervention or minimum intervention zones, which will provide martens with shelter and food.

Our woodland provides the animals with natural dens in the form of retained deadwood and old trees, and with a range of food thanks to diverse tree species and dense ground cover, which supports small mammals, birds, invertebrates and fruits.

If you’re keen to learn more about the skills and techniques of biodiversity conservation and using sustainable management principles, we offer a comprehensive Sustainable Woodland Management course. The main tutor for this highly practical five-day course is woodland manager Rob Goodsell, who takes care of CAT’s beautiful and sustainably managed woodland, Coed Gwern.

Click here to take a look at our upcoming courses

Managing woodlands for people and nature

Pine martens rely on well-connected, diverse woodland habitat for food, shelter and to raise their young. At CAT, we have been planting more native trees and maintaining a well-developed ground and shrub layer to create a mosaic of habitat to allow the pine marten population to spread even further.

Dulcie is CAT’s Natural Resource and Volunteer Officer, helping manage our woodlands and wild spaces for people and nature. She has a BA (Hons) in Marine and Natural History Photography, a course that put heavy emphasis on environmental subjects and concerns.

Discover more of the wildlife of CAT

Join us for one of our unique experience days to learn more about our amazing natural world and how we can help protect and restore wild nature. We can’t promise you’ll spot a pine marten but we can guarantee a great day out in the woodlands and wild spaces of CAT. 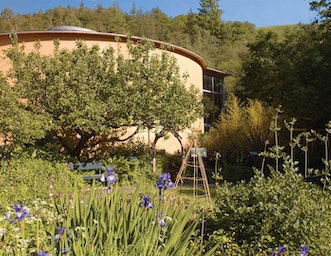 A new season at the Centre: CAT hosts a community open day with drop-in sessions on future plans