In the second in our series on sustainable cities, Paul Chatterton looks at how designers are connecting to and learning from the natural world, helping transform the relationship between urban dwellers and their environments.

Cities and nature have become strangely separated. One is associated with work, commerce, industry, consumerism and a host of negative ecological effects such as pollution, noise and dirt. The other is associated with tranquillity, leisure, escape and beauty. But this unhelpful binary must be challenged if we are to create truly sustainable urban areas: cities and nature need to reconnect through a new human-nature urban deal.

Two ideas are central to this fundamental rethink of city life: biophilia and biomimicry. Biophilia literally refers to the innate emotional affiliation of human beings to other living organisms and the strong emotional and psychological benefits that are derived through connection to nature. This idea has been brought into the realm of urban design to replicate the experiences of nature into the design process in ways that reinforce that connection.

At this scale, significant shifts would be required as planning and the management of space is reoriented around a connection with natural and biological systems that we depend upon.

Leading advocates and architectural practitioners of biophilic design, Terrapin Bright Green, have outlined its essential patterns, which include connections to nature especially in terms of presence of views, air, water and light, the use of natural materials in ways that reflect and enhance natural forms and senses, and create spaces that evoke certain senses including withdrawal, mystery, excitement and also risk.

Biophilic urban design is an agenda for creating regenerative or restoration urbanism, which proceeds through learning from, connecting to and working with natural systems and creating cyclical and slower relationships between the social and natural worlds. Just as in natural systems, this approach to urban design proceeds from a multitude of small examples that accrue slowly over time and connect together.

Applied at a city scale, the biophilic city would foreground an organic, evolutionary and grassroots approach to design through observation, trial and error. Urban development would proceed through iterative cycles where citizens are organically involved in that development process.

As a more intimately natural system, the biophilic city would draw on decentralised and hence resilient characteristics of natural systems, in contrast to the centralising and concentrating tendencies of the capitalist industrial city. This is nothing short of a paradigm shift in terms of the relation between urban dwellers and their environments in ways that connect them to light, air, food, nature and community.

Biophilic cities would have abundant access to enjoy, benefit and learn from biodiverse, multi-sensory natural environments. These ideas are building an urban movement. The Biophilic Cities project involves 13 partner cities across the globe attempting to foreground nature within the city. Projects include promoting dark skies, coexisting with animals, creating nature soundscapes and maximising natural light.

As founder of the Biophilic Cities Project, Tim Beatley, states they are nature-ful. Birmingham is the UK’s first city to join the project and claim itself a biophilic city, mainly focusing on its efforts to develop an inter-connected network of green and blue spaces.

Learning from our environment

Reconnecting with nature is only one side of this radical new natural urbanism. The second idea is biomimicry. This literally refers to emulating or mimicking the complex engineering and design principles found in the natural world. It is gaining traction within innovation circles, referring to a bio-inspired design method where insights into how nature solves problems can be used to achieve better product performance.

The real prospects come from combinations that include innovations in performance that also tackle significant social challenges such as climate breakdown or air pollution. Biomimetic design focuses on the innovations that can occur when natural features are used to improve, integrate and solve challenges. It patiently studies nature to understand what design solutions have emerged. After all, nature is a great teacher. But it teaches us not to aim just to maximise outputs or create one-size-fits-all solutions. It seeks the optimal solution for each given environment and moment. It starts from the user’s perspective, and how they would design environments to maximise their wellbeing.

Examples of biomimetic design abound: the Japanese Bullet train with a nose inspired by the kingfisher’s beak that reduces noise and power consumption while increasing speed; Velcro fasteners inspired by hooks on seed burrs; or the swarming patterns of animals, especially bees and wasps, that are assisting with new models of air traffic control and delivery logistics.

Biomimetic design in an urban context is in its infancy. But it has a huge amount to offer in terms of the design, planning and management of urban neighbourhoods and indeed whole city areas that can begin to mimic natural patterns and processes in form and function.

There is a growing movement of researchers and innovators supporting the idea. Under the auspices of the CEEBIOS Network, the European Centre for Biomimicry Innovation recently opened in the French town of Senlis. Located in a former military camp, its aim is to support biomimicry research and teaching with the explicit goal of advancing progress towards a post-carbon society. Similarly, Biomimicry UK and its Innovation Lab is spreading the word on how to learn from nature, through workshops, seminars and collaborative research.

The pioneering green architect Alison Bernett stresses that it’s easy to mix up biomimicry and biophilia, but they are concepts with different aims. The exciting aspect for the urban agenda is to explore the applicability of both together – an approach that innovates, solves challenges and improves performance by emulating natural systems, as well as engendering a deep reconnection and love for nature and other species. And it is this last part that is so crucial. Without this deep reconnection, most people will simply not see the rationale for protecting and regenerating nature.

These are not just fanciful ideas – practical examples are emerging. We are beginning to see a proliferation of hybrid natural and built forms through, for example, living walls, rooftop farms, vertical or sky gardens and breathing buildings. These can have significant beneficial effects.

For instance, urban street canyons refer to the effect created by high buildings lining a street, which can become hotspots for harmful pollutants, such as nitrogen dioxide and particulate matter. A study by Thomas Pugh and colleagues from the Lancaster Environment Centre suggests that strategic placement of vegetation in street canyons can cut air pollution by up to 30 per cent. They can also stop urban overheating and provide effective insulation and shading for buildings, as well as reducing noise pollution. And of course, there are the psychological and aesthetic benefits of being proximate to an abundance of natural greenery.

Green corridors and linear parks can be retrofitted into the existing city. For example, the High Line project in New York transformed an old rail line into nearly two miles of urban park. It opened in 2014 and became a short cut for walkers and one of the city’s favourite parks featuring art installations and places for hanging out.

Other cities are following, including Chicago’s 606 Park and Toronto’s Bentway, which has slotted 55 outdoor rooms under its Gardiner Expressway, including farmers markets, performance spaces and a children’s garden.

Miami is also building the Underline, a nine-mile linear park underneath its metrorail line. In my own city of Leeds, a community group is attempting to do the same thing on one of Leeds’ abandoned Victorian train viaducts.

The Madrid Rio project was one of the most exciting urban reclamation projects in Europe – burying a former ring road to create over 600 hectares of parkland.

Efforts are being made not just to create greenspaces, but to create interconnected green corridors. For example, the All London Green Grid is the green infrastructure strategy for London, which sets out a vision to create an interconnected network of green and blue spaces across the entire city. It is this interconnection that is so important in terms of creating space for biodiversity to move more extensively.

It is not just streets that are turning green but whole buildings. Reputedly the world’s largest vertical garden is in Bogotá, Colombia, on a building called the Santalaia, a nine-storey residential building featuring 85,000 plants and using recycled water to irrigate them through 42 water stations. Santalaia is a giant air purifier and carbon sink absorbing the annual carbon dioxide emissions from over 700 cars.

In Milan, the il Bosco Verticale is one of the most comprehensive vertical green walls in the world. It is a living example of city design that engenders a reconnection to nature whilst solving challenges and improving performance by emulating natural systems.

Opened in 2014, it comprises two towers that are home to 1,000 different species of plants, made up of 480 large and medium trees, 300 small trees, 11,000 perennial and covering plants and 5,000 shrubs. An estimated 1,600 species of birds and butterflies interact with the vertical forest. The vegetation was specially selected according to the optimum conditions required for each plant and was the result of three years of botanic study.

The wonderful aspect about these innovations is that they are simple and based on ancient principles of vertical growing which have been evident in human culture for centuries, epitomised for example by the fabled Hanging Gardens of Babylon.

Work is also underway on vertical forests in eastern China on two towers that will be covered in 1,100 trees and 2,500 cascading plants and shrubs. The project in Nanjing city will include offices, school, shops and exhibition space. It is hoped that the towers, designed by Italian architect Stefano Boeri also responsible for Milan’s il Bosco Verticale, will absorb 25 tonnes of CO2 every year and produce 60 kilograms of oxygen each day.

Those behind this project hope to build thousands more around the world to help offset deadly urban air pollution, especially in China.

It requires a project to meet 20 specific imperatives within seven performance areas including site and sustainable mobility options, water use and recycling, renewable energy, health, materials, equity (especially in terms of quality and size of workspaces), and beauty. The Institute has also established the Biophilic Design Initiative to promote the practice of connecting people and nature within our built environments and communities.

Innovators across the world from all sectors are beginning to unlock the potential of nature in the city, with biophilia and biomimicry being just two aspects of the wider bio city agenda. The question remains whether action can be fast enough to respond to the urgent threats of climate breakdown, water stresses, pollution and biodiversity loss.

Paul Chatterton is an academic, campaigner and writer. He is Professor of Urban Futures in the School of Geography at the University of Leeds, and a visiting lecturer in CAT’s Graduate School of the Environment. He is co-author of Do It Yourself (2007) and author of Low Impact Living (2016).

This is an edited extract from Paul’s latest book Unlocking Sustainable Cities: A Manifesto for Real Change, published by Pluto Press 2019.

Sustainability and Adaptation in the Built Environment 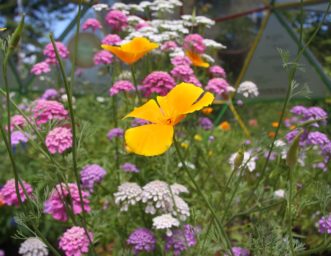 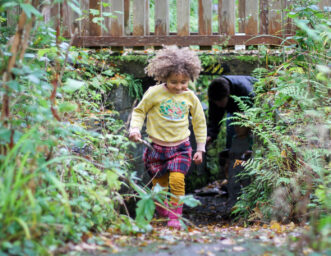 Learning in the great outdoors 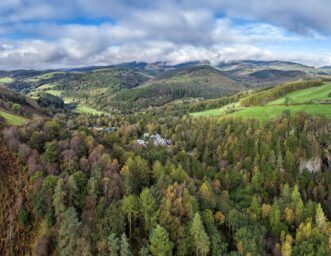 Climate action for the May elections! 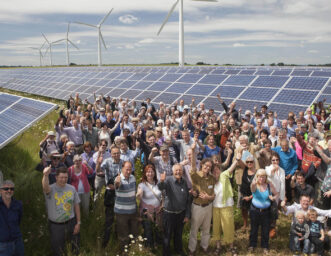