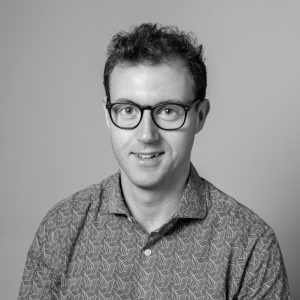 Graduating from CAT in 2012 James worked at a number of architecture practices as a sustainability consultant before moving into his current role at WSP as a Senior Sustainability & Carbon Consultant.

James works as a Senior Sustainability & Carbon Consultant at WSP, where he focuses on the whole-life carbon impacts of buildings and infrastructure projects (and reducing these as much as possible).

“Before CAT I had worked as an Architectural Technologist for about 8 years, 10 years by the time I graduated. I had studied part time for a bachelor’s degree in architectural technology from Northumbria University so I was well used to part time study, which is how I also studied for my MSc at CAT. I had become increasingly interested in the environmental and sustainability aspects of design and was looking to learn more about this so I could put it into practice.

I reviewed several courses on ‘sustainable architecture’ but CAT really stood out. All of the courses seemed to broadly cover the same topics, but CAT offered much more on the practical or fieldwork side – actually building stuff. I’ve since worked with many sustainability professionals and I realise even more the benefits I got from studying at CAT, which I feel gave me a much broader range of experience and knowledge around the topic of sustainability. My course was MSc Architecture but I learned much more than only buildings.”

After graduating from CAT in 2012 James was keen to put his knowledge into action through his work. He had been trying to do this through his existing role in Newcastle which he’d maintained throughout his studies at CAT, but with little success, so he decided to explore other opportunities.

He worked in Seville for a while through the Leonardo da Vinci scheme, placed in a sustainability engineering and architecture practice, then moved to Berlin and worked at the Institute for Creative Sustainability. After a while, he returned to the UK to work in London at ECD Architects, where he was able to focus on sustainable architecture including many retrofit projects, cutting energy use and carbon emissions from existing building stock. He then worked for a while at Sturgis Carbon Profiling as a Carbon Consultant where he began to work in Whole Life Carbon analysis before moving into his current role at WSP.