The area where CAT is based is globally important for a number of species, including some fascinating lower plants. Lichenologist Dr Joe Hope explores the lichens, liverworts and mosses of west Wales, and highlights why these often overlooked organisms are so ecologically important.

When most people think of wildlife they think of things like ospreys, otters and orchids, and less often of the small things like worms, mites and mosses. But here in Wales it’s the little things that make up the lion’s share of our incredibly special biodiversity.

There are 47 species of land mammals in Wales but 1250 lichen species and 811 species of bryophytes (mosses and liverworts)! But perhaps more importantly, many of these ‘lower plants’ that thrive in the cool wet climate of the western areas of Wales are now rare or extinct in the rest of the world.

As well as the suitability of the climate, western parts of Britain have escaped the worst of the industrial pollution of the 19th and 20th centuries, which annihilated many species in the rest of Europe.

Lichens and bryophytes share common characteristics in their lifestyle and ecological niches: because they have no roots they must absorb water and nutrients from their immediate environment. This is why they do so well in moist climates, but also why they’re so sensitive to atmospheric pollution.

What is a lichen?

Lichens are actually two different organisms. They’re basically a partnership between a fungus and an algae and/or cyanobacteria.

Since algae and cyanobacteria can photosynthesise, they provide food for the fungus, getting shelter in return – scientists call this kind of win-win situation between two different organisms a ‘mutualism’.

Lichens and bryophytes really come into their own in our Atlantic (or ‘Celtic’) Rainforests, which form an important element of the globally rare Coastal Temperate Rainforest habitat, where they envelop trunks and branches of the trees as well as covering most of the ground and abundant rocky outcrops. It is the lower plants that give the Atlantic rainforests their distinctive colour palette and texture.

The epiphytes (plants that grow on trees) often require long term stability in their environment, and may not survive intensive forms of woodland management such as clearfelling or even coppicing. As such, the more sensitive of these species are known as ‘ancient woodland indicators’ and are often of very high conservation importance, since they can signal habitats likely to harbour other rare and discerning species belonging to more cryptic groups such as fungi and invertebrates.

As well as being an intrinsic component of the biodiversity of Atlantic rainforests, these plants provide shelter and food for many other organisms and form important ecosystem functions such as storing water and fixing atmospheric nitrogen.

The diversity of species in the lichens is also matched by a tremendous variety of chemical compounds, often found nowhere else in nature, and in many cases these perform biochemical reactions that have been shown to be medically significant.

The woodlands at CAT, having relatively recently appeared from bare ground at a site that was once an industrial slate quarry, lack the luxuriant old-growth lichens and delicate rare liverworts of the ancient woodlands, but because the climate is so favourable there is still a rich abundance of woodland mosses such as the feathery Thuidium tamariscinum and springy mats of Rhytidiadelphus loreus.

Twigs are draped with the old man’s beard lichens of the genus Usnea, and seeping rocky banks are often plastered with the deep green scales of the liverwort Pellia epiphylla.

If you look up at the higher parts of trunks and branches of the trees you may see dinner-plate-sized rosettes of the green shield lichen Flavoparmelia caperata.

Short journeys from CAT will take you to some of the best sites for lower plants in the British Isles, where the Atlantic Rainforest habitat is more fully developed.

The Dyfi Forest has many interesting lichens, with visitor facilities at Tan y Coed and Foel Friog, just north of CAT.

The valleys running into the Dyfi estuary from the south, Cwm Llyfnant, Cwm Einion, Cwm Clettwr have gorge sections with good representations of Atlantic rainforest.

Possibly the finest temperate rainforest in Wales is to be found at Ceunant Llennyrch National Nature Reserve near Maentwrog, a dramatic gorge site with a number of very rare species of lichens, mosses and liverworts. Also very fine, and slightly closer, is Coed Ganllwyd National Nature Reserve, just north of Dolgellau.

Newcomers to the Dyfi Valley

Last year, for all its difficulties, was an interesting one for naturalists as many people took time and care to examine familiar places in greater detail than usual.

In the Dyfi Valley we’ve seen a couple of exciting lichen newcomers: these organisms are known mostly for not moving around, so when they do it’s exciting!

Specimens of Usnea articulata – the string of sausages lichen – have been discovered in the nearby village of Corris Uchaf; it’s clearly been hanging out there for some time, judging by its size.

Even more notable was the appearance of the goldeneye lichen Teloschistes chrysophthalmus on a crab apple tree just south of Machynlleth. This beautiful lichen was thought to be extinct in the British Isles until a single specimen was found on an apple tree in Herefordshire in 2005. It was discovered in South Wales in 2015, but this new find is the first record for the northern half of Wales and the northernmost record for mainland Britain.

This area of Wales is rightly celebrated for the protection of iconic species such as ospreys, red kites and pine martens, but look a little closer and you’ll find a whole new world to explore amongst the stones, trees and soils of this unique landscape.

Joe Hope is an ecologist and lichenologist living in Glaspwll near Machynlleth, where he manages a small farm on which nature conservation is a primary objective. He runs occasional Celtic rainforest moss safaris for those wanting to explore this fascinating habitat in greater detail. https://www.cefncochfarm.co.uk 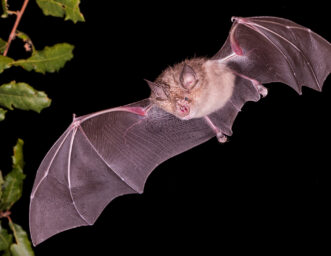 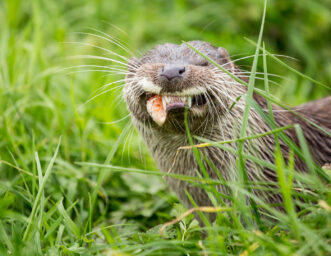 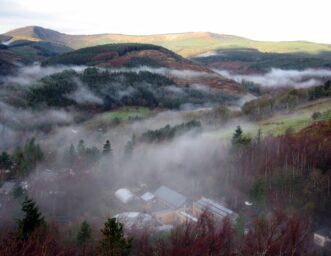 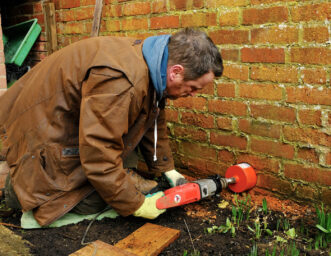 Building with nature in mind