March 2, 2022
Home » Latest IPCC Report is a stark warning of the cost of inaction on the climate

We summarise some of the key points from the latest IPCC report and explain how CAT is helping combat the climate crisis.

The latest Intergovernmental Panel on Climate Change (IPCC) report was released Monday 28 February, Climate Change 2022: Impacts, Adaptation and Vulnerability. It was one of a series of reports which have been released in 2021-22. This one focuses on the natural and socio-economic impacts of climate change, following the report Climate Change 2021: The Physical Science Basis, which focussed on the physical climate system. Later this year there will be a report on the mitigation of climate change, and finally a full Synthesis Report in September 2022.

The IPCC reports provide evidence to demonstrate to policymakers and governments the urgent need for action on the climate crisis. Each report compiles information into one document and a summary for policy makers.

The latest report highlights that continued inaction will lead to dire consequences for both people and nature, with the people who have contributed least to the crisis being the most vulnerable to its effects. Some 3.3 billion people live in highly vulnerable areas, with UN Secretary General Antonio Guterres describing the report as an ‘atlas of human suffering’.

Even if we manage to limit warming to 1.5 degrees will still see increases in extreme weather events, and their frequency will increase further if temperatures rise above this level. We are already seeing widespread impacts from a changing climate system, such as worsening floods, droughts and storms, and many of these changes have become irreversible. Beyond certain limits, adaptation will become impossible for many species.

However, the report also offers hope – the cost of action in the form of adaptation and mitigation measures is far less than the cost incurred by delays and inaction, which will result in further loss and damages caused by climate change. Any mitigation efforts will help reduce (but not eliminate) the effects of climate change. Every fraction of a degree matters, and investment in adaptation will save lives.

The report discusses some topics which have not been covered in IPCC reports before. One of these is tipping points – there is increasing concern in the scientific community that tipping points may be close, beyond which it is no longer possible to limit or predict temperature increases. One example of such a tipping point is the melting of Arctic permafrost which is currently storing large quantities of methane – a powerful greenhouse gas. Melting would release this methane, leading to increases in temperature and therefore more melting and more methane release. Because the methane has accumulated in permafrost over long periods of time through natural processes, there is no easy or quick way to lock it away again. The resulting temperature increases would also have other irreversible knock-on effects leading to further warming. Tipping points could lead to rapid changes in the Earth’s environment and ability to support human life. They have not been considered in such detail in previous IPCC reports and they are still not well understood in terms of possible timings of crossing them or interactions between them.

There is also explicit reference to the effect of these extreme events on mental health and the need to focus on issues of climate justice as measures to redress loss and damages are implemented. The role nature has to play in combatting the climate crisis is also covered – but it can only help if we can stop the spiralling decline of wild species and habitats. The IPCC recommends that 30-50% of land is put into conservation measures.

“This report only serves to highlight the urgency of taking far more urgent and extensive action to reduce the accumulation of greenhouse gases in our planet’s atmosphere. This is one of CAT’s core principles, and is a key aspect of sustainable living. The more people we can inspire, inform and educate in climate solutions, the faster we can create cultural tipping points that move us to create a world that is safer and healthier for people and nature.”

Our 15 years of Zero Carbon Britain research provides an holistic vision for how the UK could provide itself with sufficient energy and a modern standard of living using only readily available technologies. Some of the key ways to dramatically reduce emissions include high levels of insulation in buildings, changing what we eat and how we use our land, renewable energy sources and changes to the amount and ways we travel. CAT’s work today continues to build on this research, supporting practical action on climate emergency declarations in councils, communities and other organisations, to increase the speed and scale of action in line with the latest science.

Our training increases people’s knowledge, confidence and skills to take collaborative action across all levels of society, and we bring together people from different sectors and with different perspectives on the challenges we face and ways to deal with them. In these ways we can collectively find the best methods for transforming the systems which hold us back from the sustainable future we all so urgently need.

Our Graduate School of the Environment also looks at deep transformational adaptation to give students the tools to better understand and transform the systems that keep us locked into a warming climate. Modules cover various approaches to climate change mitigation and adaptation, including how these could be implemented at pace in ways that address the root social, economic and environmental vulnerabilities.

Find out more about CAT’s work and ways you can get involved. 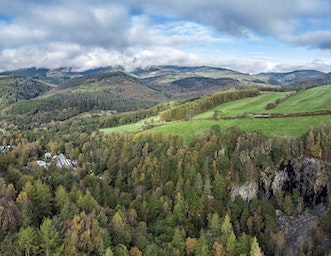