World renowned climate scientist Sir John Houghton has died at the age of 88.

Sir John was a great friend of CAT and many other environmental organisations, and helped raise public understanding of both the impacts of climate change and the need for urgent action on solutions.

An illustrious career as one of the world’s most eminent climate scientists included serving as Co-Chair of the UN Intergovernmental Panel on Climate Change (IPCC) Scientific Assessment Working Group from 1988 to 2002. In 2007, he received the Nobel Peace Prize on behalf of the IPCC, an award shared with Al Gore.

A former Director General and later Chief Executive of the Met Office, Sir John founded the world renowned Hadley Centre for Climate Science and Services. As one of the foremost climate scientists of his generation, he contributed greatly to the understanding of the causes and impacts of global temperature rise. 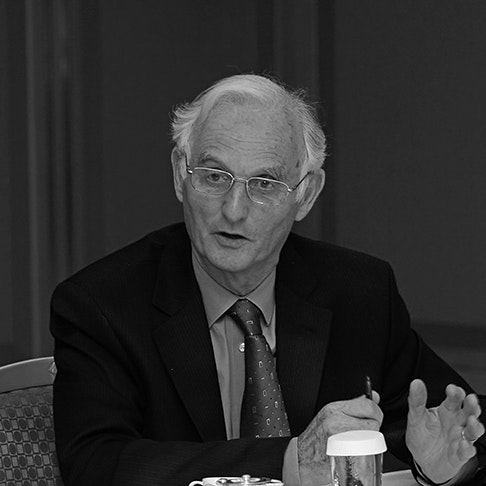 In 2007, Sir John – who grew up in Rhyl, Denbighshire – moved to Mid Wales, becoming a near neighbour and valued adviser to CAT.

“Sir John Houghton was a great inspiration for CAT’s Zero Carbon Britain research, and a good friend. Years before net-zero carbon became a goal of governments around the world, Sir John encouraged us to explore solutions rooted in what the physics of the climate science demands, rather than what is judged to be politically palatable.

“We worked with him at several UN climate summits, and in 2016 he made a generous donation to CAT that allowed us to create the annual Sir John Houghton Bursary for our postgraduate students, helping support the next generation in exploring climate solutions. We will miss his wisdom, deeply held beliefs and foresight.”

The Sir John Houghton Bursary is awarded annually to a promising student who demonstrates that they have an excellent academic record and a passion for tackling climate change.

“I have spent a lifetime studying the atmosphere and the climate and latterly have been concerned with the reality of human induced climate change. I now want to help the next generation tackle this serious problem, possibly the biggest the world faces.”

Thank you, John, for everything that you did to help build a better world, and for your friendship and support over many years.

Our deepest condolences to all of Sir John’s friends and family.