For a 100% renewable electricity system to work, we need reliable storage to cover days when the wind doesn’t blow and the sun doesn’t shine. Paul Allen looks at how power-to-gas back-up could transform the energy grid.

The costs of renewable energy generation from solar and wind have fallen faster than any of us in the green movement expected. Once we include all the costs of any energy choice, many renewables now compete with fossil fuels, and renewable costs are still falling. So we will undoubtedly have a rapidly growing percentage of renewable energy in our electricity grids.

However, the remaining key challenge with renewables is that their output changes with the weather – sometimes they don’t produce enough power, whilst at other times they produce too much.

One of the current ways of dealing with the peaks in wind power at times of low-demand, such as during the night, is called ‘curtailment’ – basically this means switching off the turbines and letting the wind energy pass us by. This works perfectly well, but is rather wasteful, as we might very well find that we need that missed energy just a few hours later, when Britain wakes up and demand rises as we all reach for our kettles.

So the electricity grid needs back-up systems that can be switched on and off very quickly so that we can keep everything in balance. One of the ideal technologies for doing this is our existing combined cycle gas turbines. These can be ramped up from cold very quickly, and can also be throttled down fast when electricity demand falls or the output from renewable generation rises.

Predicting what the wind will do a week ahead is fairly risky, but predicting the wind speeds an hour or two ahead is actually relatively reliable as we can track existing weather fronts with satellite and ground stations. This means gas back-up power stations can be ready and waiting to either increase or decrease their output. Gas seems the ideal back-up solution, but how well it can help the UK achieve its netzero carbon emissions target depends on where you get the gas from.

Burning more fossil gas or fracked gas doesn’t work from a climate change perspective as it means pulling more greenhouse gases from deep beneath the earth, releasing new carbon dioxide into the atmosphere. In addition, developing more fossil gas will place even more investments from pension funds, hospitals and universities into assets that must eventually become stranded as we take the actions needed to avoid dangerous climate change (or, if we don’t, the courts may well make fossil fuel investors legally and financially liable for the damage they have caused). So what can we do to back up our increasingly renewable energy driven grid?

Fortunately, there is a smart new technology that can balance the grid in a really clean way. It’s called power-to-gas, and we highlight this in our Zero Carbon Britain: Rethinking the Future report.

Power-to-gas converts surplus renewable energy into hydrogen gas by a long-proven process known as electrolysis, which uses the electricity to split water into hydrogen and oxygen. We can then use the hydrogen as an energy store, and we can add a little of it to the mix of gases currently in the gas grid. But our massive existing gas storage and transport infrastructure is not compatible with 100% hydrogen, and you can’t put 100% hydrogen into our existing combined-cycle gas power stations.

Like most developed counties, the UK already owns a vast gas storage and transport infrastructure, so it makes sense to design backup storage systems that can use this infrastructure if possible. The smart trick that power-to-gas offers is to combine the hydrogen with carbon dioxide to create synthetic methane. Using carbon dioxide from an existing source like biomass or waste, for example, to convert the hydrogen to methane would create a methane gas that is more or less carbon neutral.

This means that you can use it with all the existing natural gas transport, storage and power generation systems, and when you burn it the carbon simply cycles back into the atmosphere. Power-to-gas therefore allows the peaks in renewable electricity generation to be used for the storage of significant amounts of energy via the provision of carbon-neutral fuels that can be used directly by industry, by consumers for heating and cooking, or used to produce electricity during the troughs in renewable generation.

The European Commission and the Swiss Government have recognised the massive opportunity provided by power-to-gas, and are supporting research in this field with 24 million euros, paving the way to bring this innovative technology to an industrial stage, ready for mass roll out.

Funded under the Horizon 2020 European funding programme, a power to gas project called Store&Go was founded in 2016. It benefits from the involvement of a mixture of organisations with different areas of expertise, which should help ensure that the project can make a real difference: large industrial players, innovative small companies, and research institutes with a focus on technical concepts, electricity grids, economic studies, business development and law.

The project focuses on the integration of power-to-gas into the daily operation of European energy grids, delivering carbon-neutral natural gas to real-life customers via the existing grid. In Europe, approximately 70 million consumers of gas could be served using the 2.2 million km long gas grid.

At sites in Germany, Italy and Switzerland, research is carried out using a range of different power-to-gas concepts at a considerable scale, between 200 kW and 1 MW. These demonstration sites provide highly diverse test-beds: different climates, different grid types, different combinations of solar, wind and hydro energy. They also explore different carbon dioxide sources, including bioethanol, waste water and capturing it directly from air. This way, the project can analyse and compare the advantages of power-to-gas in various environments. 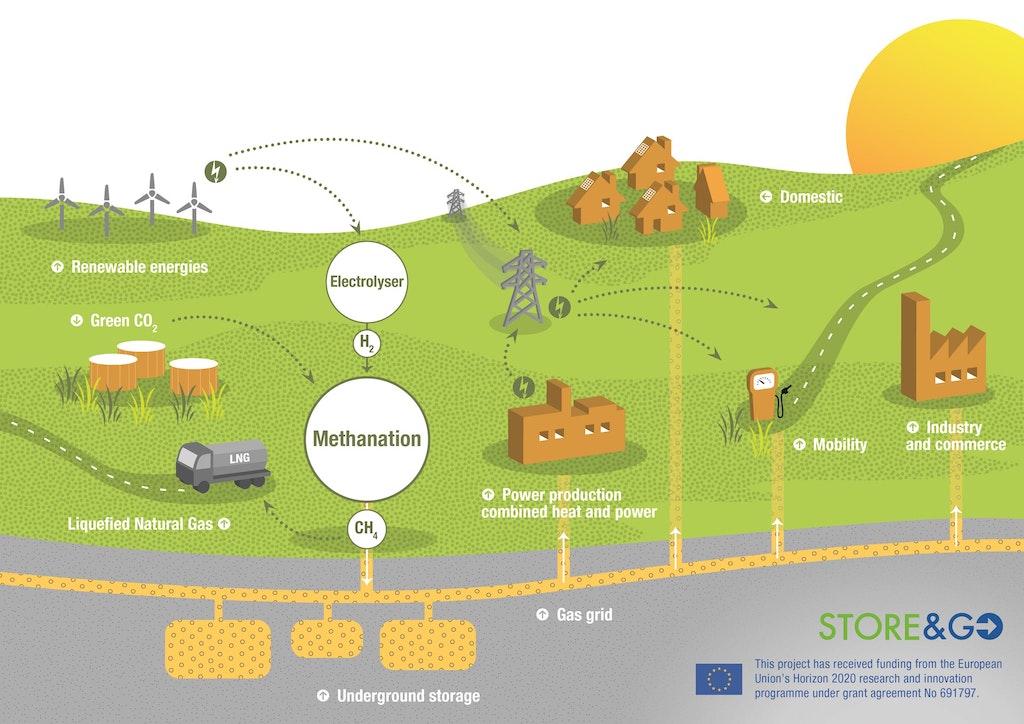 Gerald Linke, chair of the German Association for Gas and Water says:

As the costs of renewables fall and the technology is scaled up, the potential of power-to-gas to ensure a continuous supply of power to our homes makes it a technology worth exploring. So, as the new nuclear plants at Moorside in Cumbria and Wylfa in Wales look too expensive to build, power-to-gas would seem to be a technology that the UK should be rapidly investigating at scale.

Paul is project coordinator for Zero Carbon Britain. He has been a member of the Wales Science Advisory Council (2010), board member of the International Forum for Sustainable Energy (2008) and a Climate Change Commissioner for Wales (2007). He holds an Honours degree in Electronic and Electrical Engineering and has been at CAT since 1988.