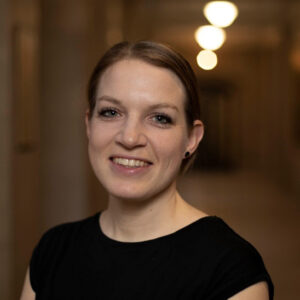 With a background in macroeconomics, Theresa currently heads up the Bank of England’s Climate Hub.

Theresa heads up the Bank of England’s Climate Hub, which leads the Bank’s policy work to build a UK financial system resilient to the risks from climate change and supportive of the transition to a net-zero economy.

She is a macroeconomist by background and has previously worked on international economics, including at the British Embassy in Washington DC.

She is from the Alps originally and having spent much of the past two decades in the UK, mostly in London. She is excited to have a reason to regularly travel to Wales.

She loves the outdoors, and on weekends is usually found kayaking, climbing, hiking or camping.

She first became interested in CAT’s work when visiting in 2018 while walking Glyndŵr’s Way.